In Memory of Christine Wickham

It’s been a little over two weeks since I received a call telling me the tragic news that my friend Christine Wickham had passed away (the night before the call). Over the past two weeks I’ve grieved for the loss of my friend, and raged at the unfairness of it all. She was taken much too soon at only 21 (she would have turned 22 on the 29th of July), and her death came as a horrid shock – one doesn’t expect to lose close friends at such a young age. After attending her funeral on Friday, I finally felt ready to write about the amazing person and wonderful friend she was. It is still unfathomable to me that she is gone, but her memory lives on in the lives of those she touched and I know I will remember her for the rest of my life. No words can truly do her justice, but I feel compelled to honour her memory in my own small way.

Although Christine and I had only been friends for a short while, it felt like we’d been friends our whole lives. She was such an amazing, generous person, filled with infectious happiness – a beautiful person to be around. She was one of the most motivated people I’ve ever met, and wise beyond her years. I had to constantly remind myself that she was younger than me, because, regardless of age I looked up to her and valued her advice. She was always there with a positive word, cheering people on and instilling her enthusiasm for corsetry (and her other interests) in those around her. It was impossible not to be affected by her passion and I’m so grateful for her influence in my life and thankful to her for reaching out to me and becoming my friend. We met through our mutual love of corsetry – she contacted me about doing a short internship with me and I’m so glad she did. 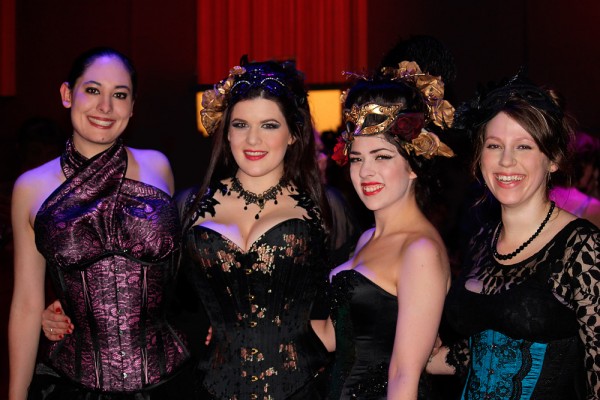 Left to Right: Christine, Lowana (me), Amy and Alice at a masquerade ball.
(Photo taken by Karen Meuleman)

The week before her death we caught up twice. I visited her at her house and she took myself and a couple of mutual friends out to a fabulous cocktail bar in Fitzroy. (Earlier that week Christine and Penny made this hilarious video on YouTube). In true Christine style, she was an excellent hostess making us all the most delicious pizza and being her usual, bright and cheery self (she loved cooking). The next day we spent sewing. Christine was working on a corset for our friend Penny and I was hand stitching a bridal corset (a sample to take with me to the UK). I made Christine a basic pattern block so she could make herself dress patterns. It was a happy day, the weather was raging outside, but we were warm and content inside working on our creative pursuits. I never could have imagined what would happen the following week.

That weekend we attended a local Masquerade ball out in the country (near where I live and work). It was such a fun night – we had a large group of friends there and I was so excited to introduce Christine to my friends, as I didn’t have the opportunity before. Everyone had such a great time and we danced for hours and hours to a fabulous swing band, all dressed up in our corseted finery. Christine wore a corset of her own creation (which was flawless in person) and myself and my friends all wore corsets that I’d made. It was a fun and carefree night filled with much laughter and the memory of it is especially dear to me now. I find comfort in the memory of that weekend, as we were all so happy. 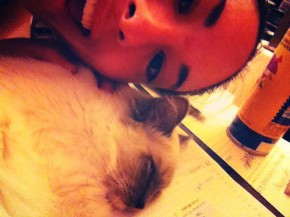 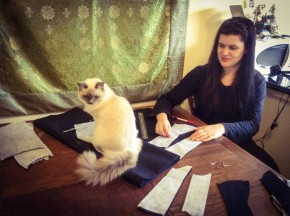 Left: Christine’s selfie with Nomi on her first day interning with me.
Right: a sneaky photo Christine took of Nomi and I on her second day as my intern (naughty Nomi insisted on getting comfortable on the coutil, no other surface would do)

We first came to meet when Christine contacted me about becoming my intern. Foundations Revealed had published an article on ‘Corsetry Internships‘ and I’d left a comment putting it out there that I’d be happy to take on interns. The next day I received a lovely, chirpy email from Christine. We set a date when Christine would be on holidays (she was in her third year of Med School and wanted to wait til her semester ended). In the lead up to our first ‘in person’ meeting, we became friends on Facebook and it wasn’t long until we were talking everyday, first about corsetry and Christine’s medical studies, then about other more personal topics. In short, we became ‘fast friends’.

She opened my eyes to the online corset community, which until then, I hadn’t even known existed (Australia is still catching up to England and America in terms of corset popularity and makers and I guess I’ve been a bit ‘cut off’). She added me to several groups, and one in particular ‘Learn to make corsets like a pro‘ where she’d created a 24″ underbust pattern (free for non-commercial use), as her little gift back to the group, that had helped grow her talent for corset making. She had her own corset label ‘Ariadne’s Thread‘ which she described as “a university student who spends her free time dreaming of hourglass silhouettes and tiny, delicate waists”  and her own YouTube channel where she blogged under the name ‘A Girl From Down Under‘.

On her first day as my intern, she brought with her some of the corsets she had made and some that were in progress. I was instantly impressed with her work and pleasantly surprised by her skills. I will be the first to admit that my first attempts at corsets were rather lacking (never having even seen a real corset in person before), but Christine’s early pieces were far more advanced than what I made a decade ago (when I started). It was obvious that she had talent and I was excited to have her helping in my studio and it was nice to be able to ‘talk shop’ whilst we worked.

After her death, her family very kindly allowed me to complete one of Christine’s work-in-progress corsets, The Blood Dragon. It was so close to being finished and she’d even been working on it at my studio – I couldn’t bear the thought of it remaining incomplete. All that was left to do was to finish the scale flossing on the hip line and bind the bottom edge. It felt good to do something to help. Finishing her corset was incredibly special for me. I took every care to complete it as she had envisaged it and it was a rather emotional evening. I took it with me to Hobart on the day of her funeral to return it to her family. 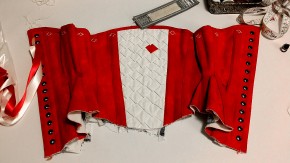 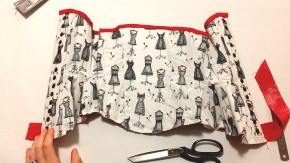 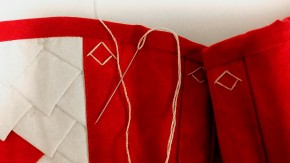 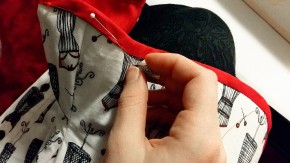 Left: I found some matching embroidery thread (in an off white) and matched the number of strands to her original flossing.
Right: hand finishing the binding on the hips. 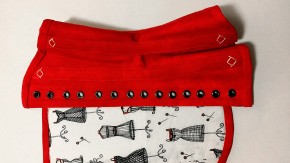 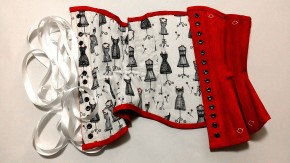 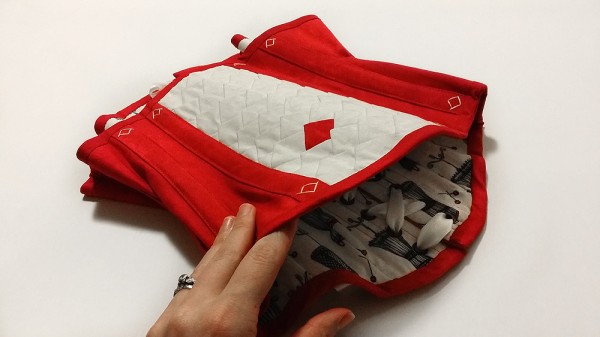 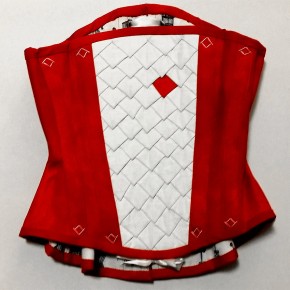 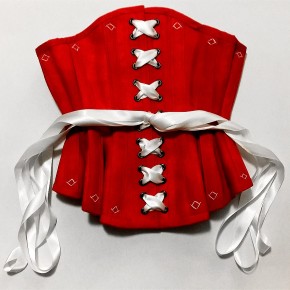 It was hard to get a photograph that accurately showed off the incredible curviness of this corset. I didn’t take measurements, but it did have a huge hip spring and a tiny waist. 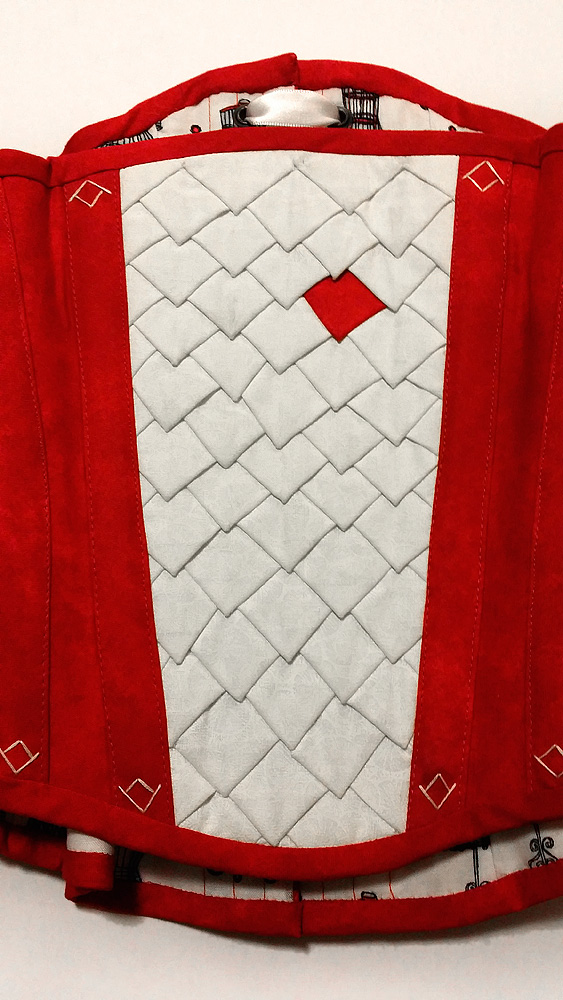 These scales were all sewn by hand by Christine. The red scale is a tribute to Smaug (The Hobbit) 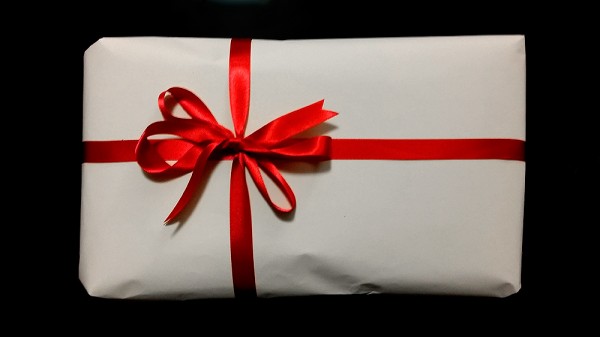 Wrapped and ready to return to her family.

Attending Christine’s funeral was lovely but incredibly sad and I was reminded of the unfairness of it all many times. The coming together of her family and friends was a beautiful thing to be a part of as we celebrated her life. You only had to glance around the room to see how many lives she touched (indeed the large room was packed with many people standing). The eulogies from her friends and family were incredibly touching and I loved hearing about her and her life from others. There were many, wonderful sides to Christine and I won’t claim to have known her best as our friendship was still growing. The Christine we all knew was intelligent, positive, motivated, ambitious, unfiltered, happy and incredibly passionate. She was kind and generous and always thinking of others. She came up with the idea to fundraise a surprise overseas trip for her friend Lucy to attend the Oxford Conference of Corsetry. Putting an incredible amount of time into the campaign, she asked me to help and I’m glad I said yes. Working with Christine to make the campaign a success was a privilege, as every time someone would support the campaign, Christine would get so excited. Giving to others brought her a lot of joy and that generosity of spirit was rare and infectious. 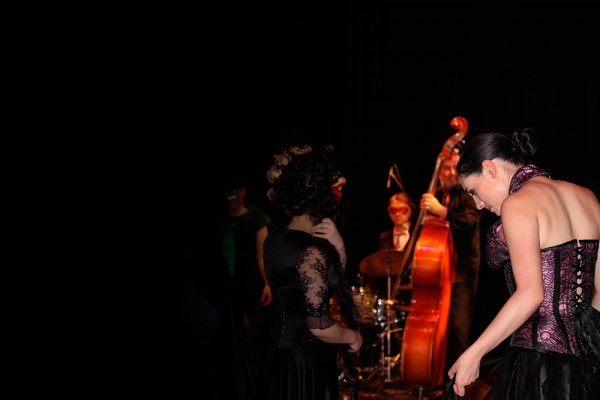 Dancing at the country ball to a fabulous swing band. Isn’t she beautiful….
(Photo taken by Karen Meuleman)

What Christine and her death have taught me is that life is short and it should be lived as fully and passionately as possible. Fill life with people who you care about, and do things that bring you happiness and fulfilment. Don’t waste time doing things you don’t care about, and do what you can for others. I’m more motivated than ever before to do well with my corsetry. I am so glad for the time we had together (although it was much too short) and am grateful for her love and friendship. My life is better for having had her in it, and I wouldn’t change that time for anything.

I miss you Christine. You are loved.

Leave a reply Click here to cancel the reply

At Vanyanís, we believe in slow fashion – high quality, versatile pieces made to last – not fast fads to be discarded in a few months. Rather than a passing trend, we focus on fashion as an investment; a Vanyanís wardrobe is a collection of timeless favourites made with quality and ethics at the fore. Vanyanís is a luxury fashion label known for sophisticated, sumptuous designs. We specialise in Exquisite Corsetry, Bridal Couture and luxurious Ready-to-Wear collections. We are an online fashion business shipping from both Australia and New Zealand. We specialize in teaching corset making through our in-person courses in Wellington, New Zealand. In 2023 online courses will be available for students worldwide.

View Open
The Lillian #Underbust #Corset is a luxurious, lim

View Open
The Nadja mesh #underbust #corset is an exquisite

View Open
Hello dear friends, it's been a while - how are yo

View Open
This fabric is a cotton/silk/metallic blend, and i